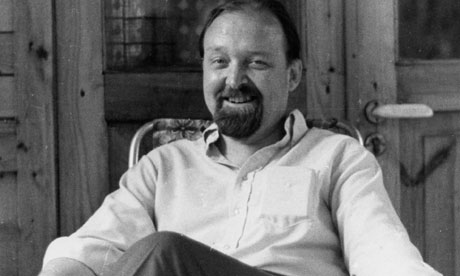 Peter Carson, pictured in the 1980s, helped Penguin enact the changes in marketing, sales and publicity needed to help the company survive

Peter Carson, who has died aged 74, was editor-in-chief at Penguin from 1980 until 1998, and weathered the transition from a tradition-bound era in British publishing to the current age of more corporate and consumerist thinking.

When I came to Britain from the US to head Penguin in 1978, the company was failing and dysfunctional, unsuccessful in economic terms and not in tune with what the public wanted to read. It soon became clear to me that the small Allen Lane hardcover unit that Peter then presided over – he was also Penguin's history editor – represented a view of publishing that accorded with my own. Before long, he was asked to head Penguin's general publishing. It was not easy for me to persuade him to accept the title of editor-in-chief. "I would prefer to just be called 'editor'," he said, "but I'll take on the larger role." I insisted that the job required the title. He then took a leading part in enacting the many changes that rapidly ensued in marketing, sales and publicity. By the early 1980s, Penguin's stature had recovered.


For 20 years he was a behind-the-scenes adviser on issues ranging from industrial relations during James Callaghan's government to numerous company acquisitions. He supported the development of indigenous publishing in Penguin's overseas companies, which had previously almost entirely distributed British books; and trained Penguin India's first editor. Many issues that arose in his years were dramatically conflict-laden, such as the struggles involving Penguin's publication of Salman Rushdie's The Satanic Verses and the historian David Irving's unsuccessful libel case. But more than most, Peter eschewed confrontation, and was a trusted confidant in difficult times.

As Penguin's reach expanded around the world, the question sometimes came up of publishing in foreign languages. Peter and I were both against this and didn't do it (although Penguin now has). I worried about the increasing corporate dominance of Penguin, and thought that there was enough Anglo-centric terrain for us to plant our feet in. Peter had other reasons. He loved the dominance of English and felt it should be more widely used, but should be used properly. The universal use of English, with the addition of more and more slang or foreign words, was not something he looked forward to. "French for the French," he would say, "they have a rather good language. English is what we do here at Penguin."

The company's backlist interested him at least as much as the novelty of the new. When, after we saw some miniature Spanish books on a trip to Madrid, I proposed we publish pocket-sized Penguin 60s at 60p each to celebrate Penguin's 60th anniversary in 1995, he and his staff managed to produce a list for the series within three days. When these first 60 titles sold in the many millions, he had a list of a further 60 ready over a weekend.

Peter's coolness extended to his negotiating style. I often heard him on the phone offer for a book we had agreed to try and buy. He would say few words to the agent, but with considerable firmness and no emotion. I only once recall him upset with his own conservatism, when we failed to acquire Umberto Eco's The Name of the Rose. But he said to me: "One can't publish all the books, and if we don't get a book for whatever good reason, this is no problem for me. Next year, I'm able to buy it in a bookshop."
Peter was born in London, educated at Eton college, where his classics studies won him the Newcastle prize, and did his national service in the navy before going to Trinity College, Cambridge, in 1959. His Russian mother, Tatiana, was a formidable presence and made certain that her son could speak her language. His Anglo-Irish father, Joseph, had survived the Somme but died when Peter was nine, in the midst of a career both in the Foreign Office and as a barrister.
It seems hard to believe, but Peter was not overly diligent about his studies, and after university seems to have greatly enjoyed his first job, escorting tourists on coach tours through Austria. In his first publishing post, with the general division at Longman, which he joined in 1963, he kept pubs in business and filled the premises with smoke.
John Guest, a great Longman editor who in later years worked for Penguin, took him on and taught him the essentials of editing and publishing. Peter progressed quickly and moved to Penguin in 1972 when Pearson, which owned both Longman and Penguin, merged the general publishing lists. He came over from Longman with Eleo Gordon, whom he married in 1975 and who herself became a Penguin stalwart.


Peter's interests ran from the most scholarly to many aspects of pop culture. Actually, he was interested in life itself – what was going on today, what had happened yesterday and in centuries past. Historians such as Ian Kershaw, Simon Schama, Mary Beard, Robin Lane Fox and John Cornwell represent only the tip of the iceberg of authors Peter brought to prominence. While his primary interests were non-fiction, Peter was no stranger to fiction and loved reading mysteries, and before he left Penguin had acquired Zadie Smith's White Teeth.

As with the best writers, the work of inspiring editors and publishers lasts much longer than their own lives. Publishing is well-populated by the people Peter hired or nurtured, among them Andrew Franklin, who went on to found Profile Books, and with whom Peter had a third act after he left Penguin in 1998. At Profile, where he remained until 2012, he was again permitted to express his individuality by commissioning major work by, among others, Rosamund Bartlett and Robert Irwin.

Peter was not, in his mature years, particularly a person for the social side of publishing. He had his lunches and knew the best restaurants – not necessarily the most posh – and attended parties, but left early. At home Eleo created the order that made it possible for him to read virtually everything, travel widely with their daughter, Charlotte, especially to eastern Europe, and translate from the Russian for Penguin and Norton. Only a few days before he died, Peter was extremely happy to have completed a translation of Tolstoy's The Death of Ivan Ilyich.
He is survived by Eleo and Charlotte.

Footnote from Bookman Beattie:
I am especially privileged to have had both Peter Carson and Peter Mayer as colleagues during my Penguin years. One of the great highlights of my visits to head office in London was to attend publishing meetings where these two outstanding fellows, both geniuses in their own right, directed Penguin's publishing acquisitions and initiatives. I was in awe of them both.
Both were hugely supportive of our early NZ publishing ventures and gave me enormous encouragement.
Posted by Beattie's Book Blog at 4:25 pm