How we made the children's favourite Angelina Ballerina 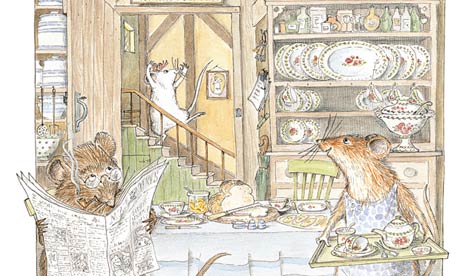 'I used memories of the thatched cottage where I grew up' ... Angelina Ballerina. Click to enlarge

In the early 1980s, my five-year-old daughter was obsessed with ballet. Her heart's desire was a pink tutu, so when my husband's publishing house, Aurum Press, wanted to commission a children's picture book, I sat at the kitchen table and wrote a story straight off about a would-be ballerina. Originally my heroine was based on my two daughters, and I called her Primrose, but as soon as I showed the story to Helen Craig, the illustrator I'd worked with on the Little Mouse counting and alphabet books, she drew the dancer as a white mouse. I immediately felt that Helen had captured the epitome of the character: any child from any culture can identify with a cute little mouse. Then we sat down with the publishers to find a suitable name. We started with the letter A, and when an editor called Angela came into the room, Angelina Ballerina was born.
I wrote the first book as a one-off in 1983. About six months later we got a call asking for another. It was easy to oblige because my daughters were by then going to ballet classes and I would eavesdrop on all the jealousies, upsets and dramas that erupted constantly in the class and elaborate on them. Once, when my daughter was ill in bed and threw a tantrum about missing a show, I gave in and let her perform. It was a disaster, of course, but I used the experience in Angelina and the Princess, when Angelina tiptoes off to some auditions from her sickbed and fails to win the lead role because she is unwell.

Many of the characters were based on real-life friends and family: Alice was the mouse version of a very loyal friend of my daughter's, and Henry was my son, who followed his two sisters everywhere. If you live with children, there are outbursts and meltdowns every day, and I wanted to write about real situations so readers knew Angelina had ups and downs just like them. Children understand Angelina because she makes a lot of mistakes – but she always picks herself up and dances on again.

Helen and I always talk about the book together before we start. She has a complete vision of Mouseland in her head, all based on her country childhood during the war, and this makes us an interesting combination, as I grew up in Chicago.
When the Angelina books were turned into a television series, I read every script beforehand, but it can be a wrench to have your character and stories handed over to a team of scriptwriters who have ideas of their own, however good – and few children's authors have the draconian power over brand development that JK Rowling does.

This year is Angelina's 30th anniversary, but for me, she will never grow old. As a character she's so full of life that I feel I can create any situation and just sit back and watch what she does next. As a writer, I can't ask for more.

And from illustrator Helen Craig
Posted by Beattie's Book Blog at 5:56 am