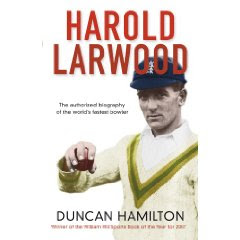 Duncan Hamilton today received the greatest honour in sports writing for an incredible second time, after his biography of cricketer Harold Larwood was announced as the winner of the William Hill Sports Book of the Year Award 2009.
Emerging victorious from a record number of entries (152), Hamilton found himself back in pole position just two years after scooping the prize for his universally acclaimed Brian Clough-themed book, As Long As You Don’t Kiss Me.

Published earlier this year to rave reviews, Harold Larwood recounts the triumph, betrayal and redemption of a working-class hero and forgotten titan of English cricket. Using documents provided by Larwood's family, Hamilton takes the reader on an intimate and compelling journey: from the cricketer’s humble upbringing in a Nottinghamshire mining village, through the shock of “Bodyline” and its traumatic aftermath, to his emigration to Sydney where he and his family found happiness.

Graham Sharpe, Media Relations Director at William Hill, and co-founder of the prize, said: “Hamilton’s second win is a remarkable achievement. He stunned us two years ago with his brilliant book about Brian Clough – the fact that he’s done it again with a completely different sporting legend is testament to his talent as a writer.”
Waterstone’s Sports Buyer, Joe Browes, said: “This is a brilliant win for Duncan Hamilton. As his first William Hill winner was about football, and his second about cricket, does this make him the Denis Compton of sports writing? Harold Larwood is one of cricket’s most legendary figures and this brilliant book will now become one of our biggest sports books of the year.”
Hamilton, former deputy editor of the Yorkshire Post, and journalist at the Nottingham Evening Post for 20 years, is only the second author to win the prestigious prize twice – following in the footsteps of Donald McRae, who won in 1996 for Dark Trade: Lost in Boxing and in 2002 for In Black and White: The Untold Story of Joe Louis and Jesse Owens respectively.

Hamilton was named the winner of the 21st William Hill Sports Book of the Year Award at a lunchtime ceremony at Waterstone’s Piccadilly, Europe’s biggest bookstore. As well as a £21,000 cheque, presented by prize judge and broadcaster John Inverdale, Hamilton also receives a £2,000 William Hill bet, a hand-bound copy of his book, and a day at the races.
Posted by Beattie's Book Blog at 9:20 am