Books of The Times
The Voice That Helped Remake Culture
By Michiko Kakutani. in The New York Times.
Published: November 23, 2009

Louis Armstrong, a k a Satchmo, a k a Pops, was to music what Picasso was to painting, what Joyce was to fiction: an innovator who changed the face of his art form, a fecund and endlessly inventive pioneer whose discovery of his own voice helped remake 20th-century culture.
Skip to next paragraph 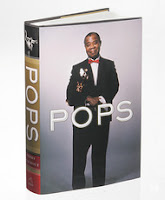 Below, left -Terry Teachout, the author of “Pops: A Life of Louis Armstrong.”


His determination to entertain and the mass popularity he eventually achieved, coupled with his gregarious, open-hearted personality, would obscure the magnitude of his achievement and win him the disdain of many intellectuals and younger colleagues, who dismissed much of what he did after 1929 as middlebrow slumming, and who even mocked him as a kind of Uncle Tom.

With “Pops,” his eloquent and important new biography of Armstrong, the critic and cultural historian Terry Teachout restores this jazzman to his deserved place in the pantheon of American artists, building upon Gary Giddins’s excellent 1988 study, “Satchmo: The Genius of Louis Armstrong,” and offering a stern rebuttal of James Lincoln Collier’s patronizing 1983 book, “Louis Armstrong: An American Genius.”

Mr. Teachout, the drama critic of The Wall Street Journal and the chief culture critic of Commentary magazine, writes with a deep appreciation of Armstrong’s artistic achievements, while situating his work and his life in a larger historical context. He draws on Armstrong’s wonderfully vivid writings and hours of tapes in which the musician recorded his thoughts and conversations with friends, and in doing so, creates an emotionally detailed portrait of Satchmo as a quick, funny, generous, observant and sometimes surprisingly acerbic man: a charismatic musician who, like a Method actor, channeled his vast life experience into his work, displaying a stunning, almost Shakespearean range that encompassed the jubilant and the melancholy, the playful and the sorrowful.

At the same time, Mr. Teachout reminds us of Armstrong’s gifts: “the combination of hurtling momentum and expansive lyricism that propelled his playing and singing alike,” his revolutionary sense of rhythm, his “dazzling virtuosity and sensational brilliance of tone,” in another trumpeter’s words, which left listeners feeling as though they’d been staring into the sun. The author — who worked as a jazz bassist before becoming a full-time writer — also uses his firsthand knowledge of music to convey the magic of such Armstrong masterworks as “St. Louis Blues,” “Potato Head Blues,” “West End Blues” and “Star Dust.”
The full review - NYT.
Posted by Beattie's Book Blog at 7:06 am