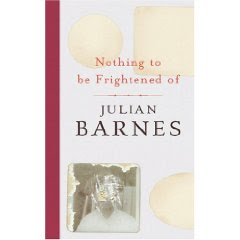 NOTHING TO BE FRIGHTENED OF
by Julian Barnes.
Jonathan Cape. NZ$59.99
This review by guest reviewer Maggie Rainey-Smith, novelist, poet, book lover.

If you say the title quickly, there is nothing to fear, but if you hesitate (as intended) after nothing, it becomes very clear. It is the nothing that keeps Julian Barnes awake. As a person who suffers from an infinity phobia, I found Julian Barnes’ struggle with his fear of death, a compelling read.

In this book he laments with dispassionate passion his Godless upbringing because he has no God to reject telling us that “In my childhood, the three unmentionable subjects were the traditional ones: religion, politics and sex.” He envies the certainty of one of his old mates who is Roman Catholic. His family are co-protagonists, in particular his philosopher brother and his mother is revealed in detached, articulate detail, that is both harsh and yet oddly endearing.

He quotes his mother expressing pride in her two sons ‘One of my sons writes books I can read but can’t understand, and the other writes books I can understand but can’t read.’ In discussing the difference between himself (the writer), and his brother (the philosopher), and the way they think about life, he says “But then, he is a philosopher, and I am a novelist, and even the most intricately structured novel must give the appearance of lolloping. Life lollops.”

The book is a delicious hardback-soft-cover, with a photograph on the front of an unidentified woman with her face scratched out – a tantalising detail that is barely explored but lingers in the sub-text of his parents story. On the back is a photograph of Julian and his older brother with their grandfather and he explores their mutual memories of this man and the moment – quite different, of course.

As the book lollops to an end, he visits Citry-les-Mines to pay homage to the home and resting place of the French writer Jules Renard and comes to what he describes as a “…logical inevitability. Just as every writer will have a last reader, so every corpse will have a last visitor.

“The end” (last page) perfectly encapsulates the author’s fears and his bid for immortality (albeit a relatively short immortality).

Footnote:
Maggie bought her copy of Nothing To Be Frightened Of at Unity Books Wellington.
Posted by Beattie's Book Blog at 6:53 am