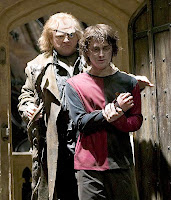 Next 'Harry Potter' film to be delayed eight months
Warner Bros. says the schedule shift from November will take advantage of a summer short of blockbusters.
By Geoff Boucher, Los Angeles Times Staff Writer August 15, 2008
Talk about a disappearing act: Harry Potter just vanished from the 2008 movie schedule.Warner Bros. shocked fans around the globe Thursday when it announced that "Harry Potter and the Half-Blood Prince," the sixth installment in the massively successful film franchise about a young wizard and his friends, would not hit theaters in November as planned.
The film will instead be delayed eight months and arrive on July 17, according to Alan Horn, Warner Bros. president and chief operating officer.The postponement was made to exploit the "relative dearth" of major summer blockbusters next year in the wake of the recent writers strike, Horn said.
He also pointed to last year's summer success, "Harry Potter and the Order of the Phoenix," which grossed $292 million in the U.S. after its July 11 release. That was the second-highest total of any of the Potter films, behind only the first movie in 2001."There is no production delay or production consideration. . . . It feels like we have an opportunity in the summer," Horn said.
For the full story go to the LA Times online.
Posted by Beattie's Book Blog at 9:10 am