The Sound of her Voi 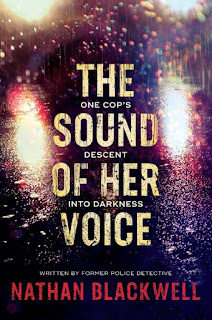 The Sound of Her Voice: One Cop’s Descent into Darkness


Some folks believe that crime novels involving the police are exaggerated versions of the real thing; The Sound of Her Voice reveals they couldn’t be more wrong. Nathan Blackwell is a former police detective. He takes you in to the real world of murky, disturbing and downright terrifying policing. This novel will shock.


The Sound of Her Voice is fiction, but Blackwell draws on real cases, each chapter revealing a seemingly standalone crime. As the story unfolds, we are shown, bit by bit, that the horrors of what went on before, is inextricably woven into what happens next.


The novel’s protagonist, Detective Matt Buchanan, unravels as he pieces together the crimes he’s trying to solve. Ultimately, it gets too personal, he goes too far, and, as the subtitle suggests, Buchanan descends into darkness.


For Buchanan, the world is a pretty sick place. He has probably been in the job too long, for one thing. And then there’s 14-year-old Samantha Coates, and the other unsolved murder cases. Those innocent girls he just can’t get out of his head. When Buchanan pursues some fresh leads, it soon becomes clear he’s on the trail of something big. As he pieces the horrific crimes together, Buchanan finds the very foundations of everything he once believed in start to crumble. He’s forced across that grey line that separates right and wrong – into places so dark, even he might not make it back.


In his former capacity as a detective, author Nathan Blackwell says he found sexual offending the hardest to deal with.


“The victims are re-living it, over and over, attempting to deal with surviving the most horrific traumas. As a cop, your job is to be the sounding board, the voice of hope, the link between them and the wheels of the legal system. It's a very tough, long process. I think I've tried to bring that out in the book. I definitely worked harder on those cases than anything else, because you get to know those people. You see them take the stand to give evidence, holding it together, giving it everything. And then the lawyers break them down. It's horrible.”


This astonishing novel will grip you and will stay in your head long after you’ve finished reading it.

Nathan Blackwell was raised on Auckland’s North Shore and attended Westlake Boys’ High School before commencing a ten-year career in the New Zealand Police. Seven of those years were spent as a Detective in the Criminal Investigation Branch, where he was exposed to human nature at its strongest and bravest, but also at its most depraved and horrific. He investigated a wide range of cases including drug manufacture, child abuse, corruption, serious violence, rape and murder. Because some of his work was conducted covertly, Nathan chooses to hide his true identity.