The library with no rules


Manila's Reading Club 2000 is a library like no other: it lets anyone borrow and then bring back or keep any of its thousands of books 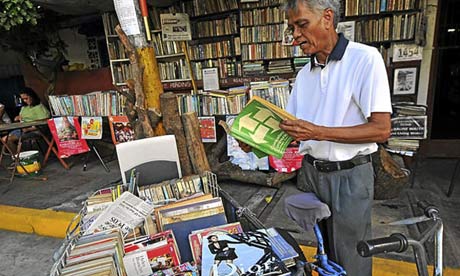 Hernando Guanlao and his library in the centre of Manila in the Philippines.

Books, believes Hernando Guanlao, need to live. And they're only alive if they are being read. Thought and effort, time and money went into making them; they will never repay it lying idle in a cabinet or on a shelf. Books need to be set free. So walk by his home on Balagtas Street in Makati, downtown Manila, and it seems books are pretty much all you'll see. Thousands of them, on shelves and in crates outside on the pavement, piled high in the garage and on the stairs, each one free to anyone who wants it.
"People can borrow, take home, bring back or keep," says Guanlao, 60, a former tax accountant, ice-cream salesman and government employee known by all as Nanie. "Or they can share and pass on to another. But basically they should just take, take!" Guanlao reckons books "have lives, and have to lead them. They have work to do. And the act of giving a book …it makes you complete. It makes your life meaningful and abundant."
Thankfully for Guanlao's faith in human nature, people also give – often people he has never previously met, or doesn't even see: they leave boxes of books outside his door. "What's taken gets replaced many times over," he says. "I don't keep an inventory. But there are a lot of books. They want to be read, so they come here."
The Reading Club 2000, as it is called, began 12 years ago as a tribute to Guanlao's late parents, both civil servants. "They gave me my love of reading," he says. "I wanted to honour them and to do some kind of community service. So I put my old books – and my brothers' and sisters', maybe 100 in all – outside, to see if anyone was interested."
More at The Guardian
Posted by Beattie's Book Blog at 11:56 pm