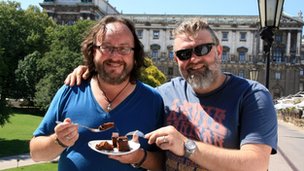 The Hairy Bikers have come the first writers to eclipse EL James since April. 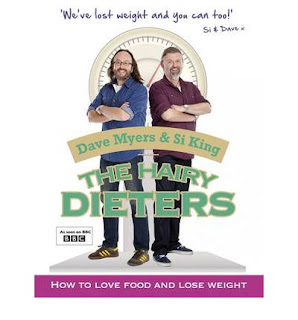 Si King and Dave Myers' latest title, The Hairy Dieters, sold 36,235 copies in the week up to 22 September.
Fifty Shades Freed, which is the third book in James' series, slipped into second place.
It ends her dominance of the top slot, which started in April.
The Hairy Dieters accompanies a popular BBC Two television series on loving food and losing weight.
Its sales of over the last week are the strongest from a paperback non-fiction book since April 2009, when the late Jade Goody's memoir, Fighting to the End sold 41,422 copies in seven days.
Despite being knocked off number one, James' Fifty Shades books occupy the second, third and fourth places in the official top 50 chart.
According to Philip Stone, charts editor at the Bookseller, the trilogy sold 94,215 copies at UK booksellers in the last week, pushing total sales of the books into seven figures.
Since publication, James' novels have sold 10,063,700 copies meaning she has become only the 12th writer to sell more than 10 million copies since records began.
"EL James peaked in the first week of July and sales have been gradually slipping since then," said Mr Stone.

"They've seen a 10% - 15% drop week on week, which is not unusual, but I can't see any of her novels going to the top of the chart again," he added.
According to the Bookseller, £29.3m was spent at UK booksellers between 15 and 22 September - a rise of £700,000 on the previous week.
Compared to the same period last year, sales have dropped by 0.7%, or £200,000.
JK Rowling is likely to be at the top of the charts next week. Her first adult novel, The Casual Vacancy, is published on Thursday.

Online retailer Amazon said that pre-orders for the book were almost four times as high as the nearest rival, Jamie Oliver's 15 Minute Recipes.
Both titles are expected to be big sellers in the run-up to Christmas.
Posted by Beattie's Book Blog at 12:52 am