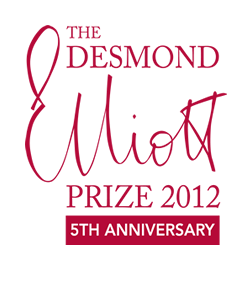 Grace McCleen wins the Desmond Elliott Prize with
The Land of Decoration
www.desmondelliottprize.com

Grace McCleen has tonight been named the winner of the fifth Desmond Elliott Prize for her novel The Land of Decoration, published by Chatto & Windus.

She carried off this most prestigious £10,000 prize for debut fiction against an exceptionally strong shortlist, which included Patrick McGuinness’s The Last Hundred Days (Seren) and Rachel Joyce’s The Unlikely Pilgrimage of Harold Fry (Doubleday).

The judges described The Land of Decoration as ‘unlike anything you have ever read’ and praised McCleen’s original language and ideas, and the novel’s vivid and life-affirming evocation of the real and surreal life of a young girl in a Christian sect who believes the Last Days have come. On the surface a domestic tale, this novel is apocalyptic in its scope.

Sam Llewellyn, 2012 Chair of Judges, who was himself first published by Desmond Elliott, comments:

‘The Land of Decoration is a novel that can move the reader from sadness to laughter with alarming suddenness. Grace McCleen's voice sparkles with imagery and ideas, and she uses it to tell a story that is simultaneously multi-layered and absolutely compelling.’

Sam Llewellyn was joined on the judging panel by Tom Gatti, Editor of The Times Review section, and Caroline Mileham, Head of Books at Play.com.

The Land of Decoration is narrated by Judith McPherson, a deeply religious 10-year-old girl living with her father. As a member of the Christian Brotherhood of the Last Days, she is bullied at school and shunned by the local community. She finds solace in her own ‘Land of Decoration’, a model world in her bedroom inspired by the Old Testament’s Promised Land. When she creates a snow scene in the Land of Decoration and real snow begins to fall outside, Judith starts to believe she can work her own miracles. However, as events take a darker turn, her Faith and her understanding of the world around her are called into question.

Like the miniature world she creates, incidents in Judith’s life mirror larger, more complex concerns. Her innocent account of unfolding events is set against an adult backdrop of social and industrial unease and the shadow cast over her home by the death of the mother she’s never known.

The Financial Times describes the book as ‘an allegory disguised as a sermon, the simulation of a partial autobiography, an impersonation of a heart-breaking psychological analysis of loneliness standing in for a useful self-help book, all the while posing as a brilliant page-turning story... an extraordinary and peculiarly haunting novel.’

Of the book and its narrator, the Daily Mail said: ‘McCleen has created a voice which rings true and resonates deep. Bursting with tension and tenderness, this novel is a small miracle in itself.’

Like the heroine of her novel, Grace McCleen was brought up in a fundamentalist Christian sect in Wales. She was removed from school at the age of 10, and developed her own secret world, making miniatures like those in The Land of Decoration. When she returned to school, a teacher recommended she apply for university, and she went on to read English Literature at the University of Oxford. She began work on The Land of Decoration whilst completing an MA at the University of York.

The Land of Decoration was published in March this year and, in addition to being named as a contender for the Desmond Elliott Prize, McCleen has been selected as one of the Waterstones 11 list of this year’s most promising young novelists. The book was also picked as one of 2012’s must-read novels by Sunday Times Culture. She is currently working on two other novels, after which she intends to take a break from writing to concentrate on her other great passion, music.

McCleen was presented with her cheque for £10,000 by Sam Llewellyn at a ceremony at Fortnum & Mason, Desmond Elliott’s ‘local grocer’.

This year marks the fifth anniversary of the award for a first novel published in the UK and Ireland, set up in memory of the celebrated publisher and literary agent Desmond Elliott to ‘enrich the careers of new writers’. All four previous winners of the Prize have gone on to publish second and, in one case, third novels: 2011 winner Anjali Joseph (Saraswati Park) published Another Country in June 2012; 2010 winner Ali Shaw (The Girl with Glass Feet) published The Man who Rained in January 2012; 2009 winner Edward Hogan (Blackmoor) has published two novels, The Hunger Trace (March 2011) and Young Adult novel Daylight Saving (February 2012). The inaugural winner from 2008, Nikita Lalwani (Gifted), has just published The Village (June 2012).