Little Kiwi Has a Forest Feast 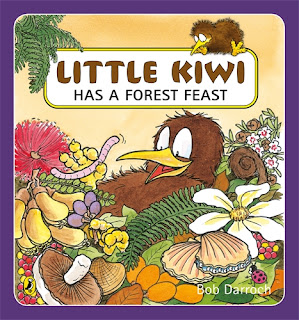 An engaging new story in Bob Darroch’s bestselling Little Kiwi series.
Poor Little Kiwi. He has caught a cold, and all he wants to do is snuggle in his burrow and
eat worms. But words don’t quite sound the same when you’re all blocked up, and Little
Sister gets confused. Is Little Kiwi getting a colt, or has he got a cold?
And is he hungry. . . or ugly?
Soon all the forest friends have gathered to see what is going on. When they discover he’s
sick and hungry, they decide to cheer him up with a wonderful feast!
But will the treats they bring him be what he really wants?

Little Kiwi Has a Forest Feast is a wonderful new heart-warming story of friendship and
caring for others.

More about Bob Darroch
Bob Darroch has been drawing cartoons for most of his life. His work has appeared on
toys, jigsaws, souvenirs and postcards and in newspapers and magazines worldwide. He
started writing and illustrating his own books for children in 1999. In 2001, the first of the
popular Little Kiwi stories were published. Little Kiwi is Scared of the Dark has since been
awarded the Storylines Gaelyn Gordon Award for a Much-Loved Book. Bob has illustrated
books for other authors, including for his wife, Ruth