WHAT TO EXPECT AT THE UPCOMING AMAZON BOOKSTORE 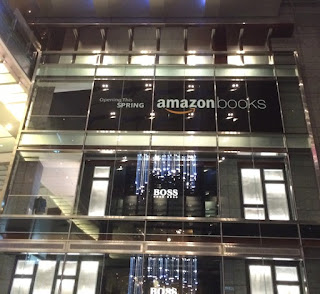 
As we first reported last week, Amazon is preparing to open a bookstore called Amazon Books in the Shops at Columbus Circle at the southwest corner of Central Park. The company put up a sign on the third floor on the north side of the mall announcing the store will open in the Spring. The Wall Street Journal reported that it will be 4,000 square feet.
It’s a somewhat odd spot, if only because the casual shopper is unlikely to stroll into the store. The Borders store in that same mall was in the middle of the second floor. But it’s sure to receive destination traffic from tourists and locals because of the novelty alone. Amazon! A real store!
There are three other Amazon bookstores right now — in Seattle, San Diego and Portland, Ore. — but this is the first one on the East coast. Its design is likely to surprise New York book-lovers. Here are some things we’ve learned from reviews of the company’s other stores.
MORE
Posted by Beattie's Book Blog at 8:26 am