A classic New Zealand road trip story, perfect for YA or adult readers 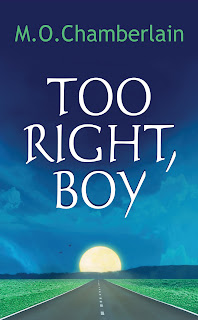 Old Harry hasn’t enjoyed the best of reputations: a former foreign correspondent with a love of whisky and gambling, he sets out to redeem himself by taking his grandson, Brad, on a road trip while Brad’s parents are on a forced leave of absence. He attempts to take good care of the boy, while imparting some much needed character training.

Despite Harry’s best intentions, the road trip only confirms Brad’s parents’ worst fears. But in the end, a lesson lived is a lesson learned, and the road trip goes a long way to exorcising familiar demons.

M.O. (Mark) Chamberlain is an award winning author. He has written twelve books including Lawrence of Arabia: Desert Wolf (historical fiction), Best of the Best (collection of writing from international students), Releasing Reluctant Writers (manual for teachers), One Stop Before the Dump (collection of short stories), Eddie’s Big Fat Lies,  Eddie Goes East (novels for boys) and in 2015 he released his own powerful memoir, With A Father Like Mine, a story of tragedy and triumph, love and loss, struggle and success. His work has also featured on Radio NZ National.
Mark’s writing presentations for teachers have featured in conferences both in Europe (ECIS) and the Middle East (TARA) and (NESA). He has presented as an author in international schools in the Middle East and schools in New Zealand and Australia. Mark and his wife Eleanor currently live between their home on Auckland’s North Shore and their retreat in Northland. They have three sons, three daughters and seven grandchildren.


SHIHVillage Publications is s a small independent publishing company run by Eleanor Chamberlain.  They have published all of Mark’s 12 titles, one of which was short listed for an international award.
Posted by Beattie's Book Blog at 11:12 am