The Year of Falling - Quirky, funny and inspiringly touching 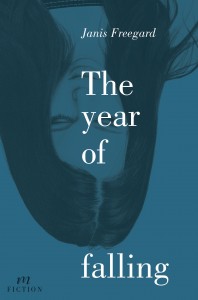 “When the porcelain dolls start turning up on Selina’s doorstep, she knows it’s a bad sign. Shortly afterwards she embarks on an ill-judged affair with a celebrity TV chef. Both events, and the lies and untold truths at their heart, precipitate a spectacular fall from grace for high-flying graphic artist, Selina.
Enter Smith: the sister who saved Selina once before. But this time Smith’s life is complicated by a small boy called Ragnar, and she’s almost too late.”

Alongside her hats for award-winning short fiction and poetry, Janis Freegard can now confidently hang another – for fiction. Freegard is well-regarded as a poet (her debut poetry collection, Kingdom Animalia: the Escapades of Linnaeus, was published in 2011 by Auckland University Press). But she’s not unfamiliar with fiction – having won the Katherine Mansfield award in 2001.

When I first picked up The Year of Falling I was after something to settle down with for the weekend – preferably something that would save me from the rain; and that would pair well with a glass of red. Unfortunately, I got neither – as the glass of wine was set shamefully to one side (Selina’s inebriated falling made me regret the majority of my life choices) and the book was devoured in a single sitting – a complete reversal of my usual Friday night.

Quirky, funny and inspiringly touching, Freegard has a knack for writing scenes which are painfully human. I watched as Selina’s life start to drift away from her, and screamed in frustration as she ‘reasoned’ her way into further trouble. And I became a silent observer (albeit slightly tearful) as the stoic Smith dealt with the heart-breaking complexities of losing a friend, raising a child, and caring for a sister.

The Year of falling is the first adult fiction title published by Mākaro Press, after their recent stunning successes with Young Adult Fiction. And it truly is a fantastic read – though I would suggest skipping the complementary glass of wine.

Review by  Emma Bryson, publishing student at Whitireia Polytechnic.
Posted by Beattie's Book Blog at 7:03 am