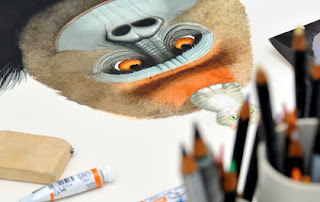 Polly Dunbar, Booktrust writer in residence and one of the ten Best New Illustrators 2008: ‘Being chosen as one of the ten best illustrators felt like more than winning an award, it was the chance to be an active part of something really exciting, a movement towards loving picture books! There was such a buzz and sense of community, which is a change from an otherwise solitary job! I'm looking forward to seeing the new best ten, and I'm enjoying guessing who they may be!’

The 2011 winners will be announced at an award ceremony at the Illustration Cupboard on Tuesday 22 March 2011.
An exhibition of work by the ten winning illustrators will be displayed at the Illustration Cupboard, The Gallery at Foyles' flagship Charing Cross Road store and Free Word Centre, with further exhibitions planned for spring and summer 2011.

The deadline for publishers sending in entry forms is 26 November 2010 and for sending books is 10 December 2010.

Click here for more information on the prize
Posted by Beattie's Book Blog at 9:56 am