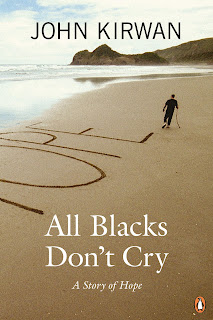 “Ground zero. For me that day arrived in August 1991. I had been away on tour with the All Blacks to Argentina. It was a long tour, and a terrible time for me. The anxiety attacks I’d been experiencing for several years had become constant and powerful.”

John Kirwan was one of the most devastating wingers New Zealand and world rugby had ever seen. A prominent and revered figure at the dawn of the professional age of rugby, he seemed to live a charmed life. Nobody knew, though, that behind closed doors ‘JK’ was living a life of tormented fear. Afflicted with depression for many years – including those as a high-profile sportsman – Kirwan was able to survive by reaching out, seeking help from those closest to him.

Depression was not something that John Kirwan ever thought would happen to him. In fact, when it happened, it took him years to acknowledge it. Like many people, he forced his dark feelings and fears to the back of his mind and just pushed on in life, even though every day was a superhuman struggle to seem normal. Mostly, he was afraid – terrified of what he might become, what he might do, and terrified that he would lose all the things he loved about his life.
“I said to myself, ‘I’ve got a good heart, I’m a good person...this is the illness, not the person here”

The turning point for John was when he finally hit rock bottom at his sister’s house. He had lost all hope of happiness, even of just being normal, and was exhausted from secretly fighting the black monster within.

“Finally I did what I should have done right back when my panic attacks began: I reached out to the right people; I acknowledged I had a problem, and with that acknowledgement came the first steps on my journey to wellness. Most importantly, I found hope - a sense that things can and will get better. Holding on to hope was how I got through depression.”

All Blacks Don’t Cry is John Kirwan’s story of hope, of working through the pain and living a full life – a poignant, inspirational and helpful example for anybody battling depression.
This is a moving, honest and inspiring story. I was most impressed.
Posted by Beattie's Book Blog at 12:14 pm