‘The Vault’
Ruth Rendell
RRP $39.99
Random House
This is only my second ever Ruth Rendell read, and I have to say that perhaps the genre is not exactly my cup of tea.   I found the novel over-plotted with too many bit-part characters and not enough suspense and intrigue... as one perhaps imagines a crime novel should have.
But, I love Ruth Rendell’s London.  In the first novel I reviewed ‘Tigerlily’s Orchids’, London was also a character.   And so, although a little bored, I did thoroughly enjoy re-inhabiting Rendell’s London: Fulham Road, Hampstead, Finchley Road, Paddington Basin, Kew Gardens, Camden Lock, St John’s Wood, and on it goes.   The Protagonist is Reg Wexford, who if you are a Ruth Rendell aficionado, you may already know from an earlier novel ‘A Sight for Sore Eyes’.    This was my first introduction to Wexford and what a nice chap.   This time, he is a retired Chief Inspector with two homes (and a social conscience about such evident luxury) and through a chance encounter with the now Detective Superintendent, Tom Ede (whom he knew years ago as a callow young police constable) – Wexford ends up unofficially involved in assisting Tom with a murder enquiry.
There are too many bodies for my liking and not enough empathy or even attempts at empathy for the murdered characters, apart from the youngest female victim.   I found it quite distracting having to absorb the names of the characters (so many of them) who might be the perpetrators of these crimes. But, what absolutely fascinated me was the back story, the sub-plot of Reg Wexford, his wife Dora and their daughter Sylvia.   I only wish that Rendell had focussed on this very interesting sub-plot and developed it more.   It was a very good parallel plot and would have stood alone with more insight into the characters of Wexford, his wife Dora and Sylvia and her boyfriend.   It definitely would have made a good novel all by itself with time to develop character, motivation and nuance.
Rendell has a very acute eye for trends and mores and she frequently gets her characters to muse on things which seem to me to relate less to the character and imply an authorial overtone e.g.  “Wexford nodded to her and she smiled.  He though how when his father was a young man most men wore hats and raised them to women they knew or even women they just knew by sight.   Would he like a return to that custom?  Not really.”   And, earlier in the novel almost a paragraph dedicated to cats and milk and dogs and bones and how it is no longer fashionable for either animal to have these.   It feels at times like Rendell has all these lovely observations that she just can’t wait to pop into the plot.   They sometimes work and sometimes just interrupt the flow of things.
If you enjoy lots of permutations and plenty of characters and you like crime and London, then you will probably enjoy this novel and you might pay more attention to out-thinking or out-witting Wexford in his quest for the killer, than I did.   One thing is for sure, you will (like me), like Wexford and his family.
Other books I’ve been reading:

The Hare with Amber Eyes
Now here is a book that has become one of those ‘must reads’ and often when a book comes with so many glowing recommendations, I  tend to resist it, thinking it cannot possibly live up to expectations.  And to some extent for me, this was true.   It took a good discussion with my No.1 Book Group and their responses for me to persevere and finish the second half of the book – and I have to say it was rewarding.   My first recommendation with this book is to treat it as a treasure to read in small chunks, as opposed to galloping through as if it were a page-turning novel.    Well, indeed – I couldn’t page-turn at all at the beginning because it is so densely written with so many words (foreign and otherwise) that I needed a dictionary and atlas and an art history lesson, to decode.
My No.1 Book Club advises that the way through this is to skip the bits you don’t understand and keep reading for understanding.   Yes, true, and it does work normally, but I can confess to feeling at times excluded by the text.
But, do persevere.  It is the fascinating story of 264 Japanese wood and ivory carvings (netsuke – soon we’ll all be collecting the stuff) as written by Edmund De Waal, one of the world’s leading ceramic artists.    But really it is the story of the Ephrussi Family (De Waal is a descendant) as they move from Odessa, to Paris to Vienna and finally London, but with one branch of the family in post-war Tokyo.   I particularly liked the post-war Tokyo part of the book.   I found it hard to feel any great empathy for the Ephrussi family because of the focus on lost wealth, art and possessions, but as the book progresses, the quirky netsuke become characters and I found myself a lot more engaged.
And, in retrospect, I now realise how much I have learned about history, art, the Jewish Diaspora and indeed these strange collectibles, the netsuke.     The book has been widely acclaimed and indeed Bettany Hughes of the Daily Telegraph says ‘The most brilliant book I’ve read for years... A rich tale of the pleasure and pains of what it is to be human’... it was this particular blurb that had me motivated and then I might say just a tad disappointed.   But I suspect it is a book I that warrants more than one reading.
Published by Vintage Books 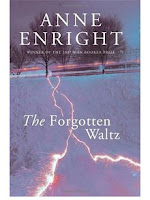 The Forgotten Waltz
By Anne Enright
Jonathan Cape London
I only discovered Anne Enright when she broke all our Kiwi hearts and knocked ‘Mr Pip’ off the top slot for the 2007 Man Booker Prize.  I rushed, as I am sure many did, to read ‘The Gathering’ to see what sort of book had dashed all ours (and Lloyd’s) hopes.    I like Anne Enright as a writer, and so it was easy to slip into her latest novel which is the anatomy of an affair, or the memory of love, and the choices we make and live with, set during the heady days of the Celtic Tiger.
Again, like ‘The Gathering’ the voice is unique and compelling.   In this novel, the teller of the tale has a slightly breathy, witty, intensity creating real intimacy between reader and writer.    Enright has a lovely eye for the contemporary Irish condition and for love.   Take this... “Six months, nine – I don’t know how long that phase lasted.  Mortgage love.  Shagging at 5.3 percent.  Until one day we decided to take out a couple of car loans and get married on the money instead.     Vroom vroom.”   T
That’s the funny stuff, but then take this ... “I go through the darkening town with Sean’s beautiful mistake.  Because it really was a mistake for Sean to have a child, and it was a particular mistake for him to have this child; a girl who looks out on the world with his grey eyes, from a mind that is entirely her own.  Lovers can be replaced I think – a little bitterly – but not children.”
It is an easy read, a great gulp of a read with a voice that carries the reader from go to whoa, and you could say that nothing really happens, and yet an awful lot does when relationships fail and children are involved.   I’m a big Enright fan and this is a most satisfying read.   As A L Kennedy is quoted as saying on the back cover about The Gathering     ‘... the product of a remarkable intelligence, combined with a gift for observation and deduction.’   That sort of sums up ‘The Forgotten Waltz’, as well.
Too Many Zeros
By Geoff Palmer

Puffin Books published by Penguin 2011
This is a rollicking good read for pre-teenage children and their parents.   It is funny, fast-paced and captivating.   A real page-turner with a most enticing first chapter where we meet the mice in the microwave, who hilariously do high-fives.    Tim Townsend and his sister Coral are from Auckland and they’ve ended up on the West Coast (with delightful contrasts between the city and the Coast popped in unobtrusively).   Their parents are embarrassingly in hospital after crashing their hang-gliders and Tim and Coral are now with and Aunt and Uncle for a few weeks on the Coast – not a mean and nasty Aunt and Uncle, no clichés here, just delightful subversion, humour and intrigue.   This is a 21st century adventure for Tim and Coral after meeting the mice who do high fives and who turn out to be aliens who have the wonderful names of Ludokros and Alkemy.
There’s schoolyard hierarchies, time travel, wicked school teachers and accessible physics – what’s not to like?   This book was published much earlier in the year but had its official launch last month at the Kilbirnie Children’s Bookshop.   Geoff Palmer, at the time was stranded due to wild weather  and snow in the deep South and made the treacherous journey by road up through the Haast and West Coast back to Wellington to be there in time for the  for the launch.    It sounded like an adventure straight from his novel.
The novel ends on a highly suspenseful note with the aliens’ attempts to return home thwarted... something tells me there is another novel to come, that this will be a highly successful ongoing saga.   So rush out now and buy a copy for the pre-adolescents in your family, perhaps to put away for Xmas.