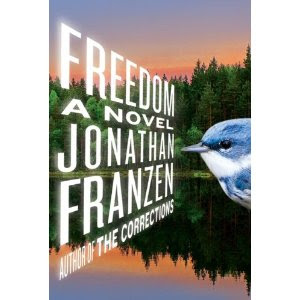 No American novelist has been honored as much as Jonathan Franzen this year, from a cover story in Time magazine to a chair on Oprah Winfrey's TV show.
His new book, "Freedom," is a huge best-seller, for a literary novel, at least, and despite sour reviews from a few crotchety old men, the critics have raved, even this crotchety old man.

Yet, the biggest prize has eluded him this time -- the National Book Award. "Freedom" was skipped by the selection committee choosing the five nominees for the prize, to be awarded in New York Nov. 17.

Peter Carey, "Parrot and Olivier in America"; Jaimy Gordon, "Lord of Misrule"; Nicole Krauss, "Great House"; Lionel Shriver, "So Much for That"; and Karen Tei Yamashita, "I Hotel."

It's an oddball list in several ways. Only one nomination -- "I Hotel" -- compares to "Freedom" in its reach. The others are smaller in scale and ambition.

Ms. Yamashita's 619-page book consists of 10 novellas with a long list of characters based on real people and includes poems, drawings, recipes, quotes from Imelda Marcos and myth about the movement to secure rights for minorities in San Francisco starting in the 1960s.
The hotel of the title is the International Hotel, a residence for minorities in San Francisco's Chinatown until it was torn down in 1981.

Two of the other books -- "Parrot and Olivier in America" and "Great House -- were reviewed in this newspaper. Mr. Carey's novel imagined the experiences of Alexis de Tocqueville and some fictional companions on the Frenchman's American tour in 1831.

Post-Gazette reviewer Kim Crow was somewhat prescient, concluding, "A two-time winner of the Man Booker Prize, Mr. Carey should start clearing out a shelf or two, all the better to receive the accolades and awards that 'Parrot and Olivier' so justly deserves."

"Great House" earned Ms. Krauss respectable reviews. Writing in the Post-Gazette, Sharon Dilworth called it "exquisite," adding that "Ms. Krauss is a poetic stylist. Her prose gives tremendous weight to her character's pain and it is their struggles to endure that make such a powerful impression."
Briefly, the novel examines the impact of emotional losses on its characters in the context of the Holocaust.

Ms. Shriver's novel, "So Much for That," focuses on the American health care system and its treatment of two families while Ms. Gordon's "Lord of Misrule" won't be on sale until Nov. 15. The judges selected the book based on its unpublished form.
All I know, from an advance brief review, is that the book is set at a small horse racetrack in West Virginia.

Mr. Franzen, 51, who won the National Book Award in 2001 for "The Corrections," sails on unaffected. He's speaking today at the Cleveland Public Library after appearing Oct. 28 at the International Festival of Authors in Toronto. His "Oprah" appearance is planned for sometime later this month.

As Franzen followers know, it will be a "kiss-and-make-up" party. The two had a falling-out in 2001 after the show selected "The Corrections" as an Oprah pick and the author recoiled at the thought of his novel lumped with her other "schmaltzy" selections.

At least, Mr. Franzen can skip the National Book Award ceremonies and take a break from traveling. The omission of "Freedom" from the nation's top book prize speaks more to the nature of prize competitions than it does to the nature of his novel.

I quote a former judge of the Man Booker competition, Great Britain's marquee literary event:
"I believed then as I do now that the Booker is essentially a jamboree, little more than a kind of sport, with its own roster of winners and losers. It shouldn't be dignified or taken too seriously."

That by 1997 judge Jason Cowley in The Guardian.