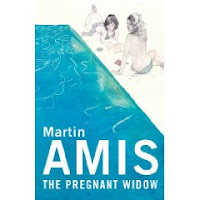 The trouble with revolutions, according to Alexander Herzen, a Russian writing in the 19th century, is that they don't leave behind an heir; they leave behind a pregnant widow. "Between the death of the one [world order] and the birth of the other, much water will flow by, a long night of chaos and desolation will pass."

The revolution in Martin Amis' fabulous and flawed new novel The Pregnant Widow is the so-called sexual revolution, the rapid social change that began in the 1960s when girls were encouraged to act "like boys" - to be aggressively promiscuous and heedless of the consequences. You will already have guessed what Amis thinks about all that.
Keith Nearing is 20 and on holiday with his girlfriend and a bunch of other 20-something friends in a castle in Campania, Italy. The summer is hot and steamy and so is the vibe: Keith's relationship with Lily is in gentle decline, and he's become obsessed with the idea of sleeping with her friend, the exquisite, busty and apparently highly willing Scheherazade. He's not alone: she's also being vigorously pursued by Adriano, a local playboy who has everything going for him - wealth, a title, good looks, fiery Latin temperament - except for the fact he stands only very little over 1.2m in his spats.

Meanwhile, they are joined by a dour lass from Edinburgh who has been dispatched thither in disgrace, having been discovered by her boyfriend naked from the waist down in a bathroom with a polo player. Everyone finds this hard to believe: Gloria Beautyman is sour, has severely cropped hair and while the other women swim in various stages of deshabille, Gloria conceals whatever there might be of a figure under swimsuits of the most puritanical cut imaginable.
Then there's Rita, alias "the Dog", the leavening influence, whose absolute lack of inhibition in word and deed serves to set the whole brew positively fizzing.

Needless to say, this sultry summer in Italy is pivotal in the lives of all of the characters, not just Keith. The novel shifts backward and forward in time, giving glimpses in "intervals" of Keith's future, and then in the last section - the coda - the lives of everyone else. Their fortunes are mixed, with more damage done than good - after all, "the sexual revolution was a velvet revolution", Amis writes, "but not bloodless."

Keith has never quite recovered from the sexual encounter that eventually transpired, his attitude to women is almost irremediably impaired and he is doomed to spend his maturity in "Larkinland", the world of Philip Larkin and other sexual lepers and outcasts. He's one of the lucky ones.
Amis has described The Pregnant Widow as "a tragicomedy with a cautionary tale running alongside the main story". The cautionary tale is the dissolution and untimely death of Keith's step-sister Violet, modelled closely on the true story of Amis' own sister, whom he has described as a casualty of the unbearable pressures placed on women by the sexual revolution.
The novel will attract its fair share of criticism for what appears, on the face of it, to be a pretty patronising stance toward women as moral and sexual beings. But while Amis has been labelled a misogynist in the past, he hardly emerges here as a champion of the moral, sexual or any other kind of superiority of his own sex, either.

He mourns the carnage that followed the collapse of the old, strait-laced world order, when the notions of love and sex were prised apart and self-love, an important ingredient in any healthy relationship, was allowed to spill over its banks.

After the grisly Yellow Dog and the grim House of Meetings, this is a return to the author's very best form, if it isn't, indeed, his best work. Much of the material is confessedly autobiographical, which accounts for the reiteration of many of his familiar preoccupations. But it's as though there's been a process of whittling going on in his career, a sharpening, a paring away to arrive at a point. The Pregnant Widow - dazzling, hilarious and hideous all at the same time - is incontrovertible evidence to his detractors that there's lead in his pencil yet.

John McCrystal is a Wellington writer and reviewer and his review above first appeared in the NZ Herald last Saturday, 30 January, and is reproduced herewith their permission..
Posted by Beattie's Book Blog at 11:49 am