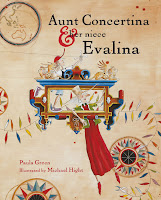 AUNT CONCERTINA & HER NIECE EVALINA
The great and the good of the literary and art worlds turned out to the John Leech Gallery on Friday night to celebrate the launch of poet and writer Paula Green and partner Michael Hight’s, stunning hardback children’s picture book, Aunt Concertina and Her Niece Evalina.
The book was officially launched by Emily Perkins’ daughter, Veronica Maughan, who read with poise and grace, and presided over by Random House New Zealand publisher, Jenny Hellen, and John Gow.
Michael Hight’s oil on board paintings which graced the white walls of John Leech Gallery for launch night, brought Paula and Michael’s book to life, turning the space into a joyous riot of colour. Most of the paintings and books were sold by the end of the night.

Jenny Hellen paid homage to Paula and Michael’s second successful children’s book collaboration – their first was Flamingo Bendalingo (AUP) – and we hope it won’t be their last! Pic left shows
pictured from left: John Gow, Paula Green, Veronica Maughan, Jenny Hellen and Michael Hight.
Footnote:
The Bookman reckons that this truly gorgeous, large format hardcover book ($34.99) with its wonderful story and glorious artwork has prize winner written all over it. It is a knockout. Sadly I could not be at the launch as I was in Wellington where Unity Books were launching another Random House title, Al Brown's Go Fish.
Posted by Beattie's Book Blog at 9:27 am