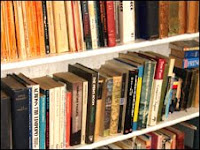 Fiction Faces Hard Facts
The Washington Post
Sunday, May 3, 2009
"Fiction is just more difficult than ever." . . . "You're going to see less fiction." . . . "Big houses are trying to figure out what the sure thing is and are rolling back to that." . . . "All our plans for doing funky stuff have been put on hold." . . . "Art's not predictable; you can't try to do art with a cookie cutter." . . . "It becomes increasingly difficult to get attention for a new author." . . .
So say agents, editors and publishers asked about the future of fiction in these trying economic times.
Fans of Stephen King and Jodi Picoult can rest easy: There will be no blockbuster drought. But the economic implosion seems to have exacerbated the long-lamented difficulty of publishing fiction by newcomers who don't look immediately marketable or by veteran writers with "bad track," as the industry calls disappointing sales.
The trend may benefit smaller presses. "We're seeing more manuscripts," says Graywolf Press publisher Fiona McRae, as corporate publishers thin their editing ranks and trim their lists. "But small houses can't take them all on."
Meanwhile, there's an optimist in every crowd.
"Fiction is pretty alive and well," says Grove/Atlantic publisher Morgan Entrekin. "It does something no other medium can do." An added benefit: "The longer the form, the more protected you are from Internet erosion."
Entrekin is mindful of the new-fiction challenge and sees a trend toward paperback originals as part of the answer. "People have been saying that for 25 years," he says, "but this time it may be truly here to stay."
Bob Thompson
Posted by Beattie's Book Blog at 6:47 am