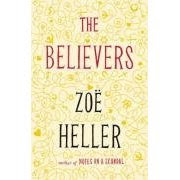 Wow. I loved ‘The Believers’ and I couldn’t put it down. Zoe Heller has a terrific eye and ear for the daft nuances that make us human. I liked all of her characters, and they were all terribly flawed, in particular Audrey, the long-suffering socialist idealist wife of Joel, the saintly left wing liberal lawyer who is now in an irreversible coma while his family unravels around him.

Audrey and Joel have two daughters, Rosa and Karla and an adopted son Lenny (drop-out, drug addict), whom Audrey appears to love more than she loves her own daughters. Then when Joel collapses in the courtroom and ends up in a coma (for most of the novel), we find out he has another part to his life of which Audrey knows nothing and when the family find out about this, they are left to consider their own choices in the light of this. Rosa’s quest to find herself is fascinating it itself and this caused quite vehement debate in my No.1 book group about how a woman of the 21st century raised in such a radical and fiercely atheistic household would choose to embrace Orthodox Judaism. Two of us who are lapsed Catholics fully understood while others found it incomprehensible.

Zoe’s writing is gloriously uneven and some of her descriptions almost odd, but they work – they stand out and the story reels you in, a willing voyeur in the unfolding drama that is the Litvinoff family. Audrey is annoyingly self-centred and vulgar at times and I often chastised her for her foul language – ah but the whole family are fairly free with expletives. The characters, however flawed are, if not lovable, then likeable. I liked all of them, and even managed some sympathy for the cuckold and sycophantic Mike who so desperately wants to have a family that he monitors his fat wife Karla’s monthly cycles for her (yes, control freak).

A few in my No.1 Book Group, decided Zoe Heller is a good story-teller, but not such a good writer. Where they thought she overdid the metaphor, I loved them e.g. the idea of Karla curled up in bed like a prawn – at first it jars, and then I see Karla who has a problem with food and her dutiful baby-making sex with Mike – I see the brittle outer shell, the mournful black prawn eyes. I loved this too, in the prologue… “Up close the three men were a small anthology of body odours”

The frustrating prologue (which annoyed not only me) becomes more relevant at the denouement when you recognise the choice Audrey made as a young woman, and how she has become stuck in a version of herself living through her famous husband Joel. The theme of people choosing an identity and becoming stuck resonates throughout, and a lovely description of this is Mrs Mee (a minor character) “she had invested her entire personhood on a horse called Put Upon and she was damned if she were going to change her bet now.”

The book lollops (Julian Barnes describes life and novels as lolloping). There is an almost self-conscious overload of acute observations of the human condition, that make each character, a sort of mini vignette and perhaps this is why some of my No.1 book group found it less than satisfactory but still enjoyed it.

We mostly all agreed that the ending is a master-stroke and Audrey was finally, quite a smart woman, even if it was still all about upholding the idea of herself as the keeper of the Joel Litvinoff legend. In the end, ‘The Believers’ is about a family committed to one man’s particular political dream, and with his demise, they are forced to face up to or find their own beliefs.

Thanks Maggie. And thanks too to your No.1 Book Group, a group formed ten years ago and who were described to The Bookman by one who knows as a group of awesome women!

I have added the cover of your 2005 Random House title, ABOUT TURNS,
which I greatly enjoyed at the time of publication, as a small thank you for your review.
Posted by Beattie's Book Blog at 12:09 pm