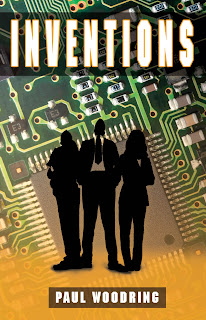 AUTHOR OF INVENTIONS, PAUL WOODRING HOLDS WORLDWIDE BLOG TOUR MAY 9, 2008.
Inventions tells the story of Robert Watson, Jr., an intelligent, educated and hard-working African American man. When he perceives that he will never be more than the token black employee in predominantly white business corporations, he sets out to establish his own company and winds up creating an industry.
The novel overlays the African American experience with the challenges faced by black Americans in the world of the 1970s. Inventions tracks the hero’s journey from Cleveland, Ohio, through the venture capital halls of northern California’s Sand Hill Road, to the business culture and technical innovation of Japan, and the glamour of Los Angeles. Inventions is the story of one man’s search for identity, for the place he truly belongs, and a love that will make him whole.

Inventions was #1 on the best-seller list at Hue-Man Bookstore in New York for the month of January.
If you'd like to learn more about Inventions, or the author, visit www.paullwoodring.com. Inventions is distributed by Pathway Book Service (pbs@pathwaybook.com)
Q & A: Paul Woodring's Inventions

What inspired you to write Inventions?
Race continues to be just below the surface in all aspects of American life. I wanted to take my experience in corporate America and express the challenges that blacks face as they try to navigate the subtle racism that still pervades our country, especially in the work place. I wanted to write a novel that provides a blueprint for increasing African American wealth, as well as encourage all to understand our different perspectives of the American experience.

What message would you give to aspiring entrepreneurs?
I feel strongly that young people should pursue the best education they can afford, pursue a profession or craft through experience in that field, then go out on their own and build their own business. I believe this is particularly pertinent to African Americans who need to begin to build wealth they can pass on to subsequent generations. My view is the best way to do this is through creating their own businesses. I also believe that corporate careers and corporations no longer provide the types of jobs and security that can support the American middle class. In today's global economy, the best future is through creation of your own business.

Are there any takeaways as it relates to the race dialog that has been raised by the Democratic primary?
The democratic nomination process has opened up the dialog about race. With a black man running for the nomination, this was inevitable. Like Barack Obama, I believe there is still much that we can all learn about each other. I hope my book adds to this understanding.

What can you tell us about Robbie's love interests in the book?
Like most of us, Robbie has flaws. One of Robbie's major struggles is the battle between his rational self and his emotional self. His rational self is responsible for his professional success and it is difficult for him to sort through his relationship with the women in his life as he distrusts his emotional self. The women in his life offer different perspectives and degrees as it relates to logic and emotion. His challenge is to determine what will make him a more complete person.

Who are your favorite authors, and why do you admire their work?
There are many authors I like, both fiction and non-fiction. It's hard for me to pick one or two. My interests range from Milton, to Thomas Hardy, to Sinclair Lewis, to contemporary authors such as James Patterson and Richard North Patterson. In most instances, I like the structure of the older authors, the output of James Patterson and the research reflected in Richard North Patterson's work.

Can you describe your writing process for our readers?
I awake around 4:30 a.m. each day and work out. Around 6 a.m., I read the major news of the day on the Internet. I start my writing process around 7 a.m. I usually outline my book, then spend five to six hours writing, then revising and refining the outline, and then continuing to write. After the first draft, I go back and assure the plot holds together and sometimes incorporate new passages. I don't write every day, but when I do, I usually can crank out as much as twenty pages in a session.

What will your next book be about?
My next novel is about global warming and how nature is self-correcting in protecting itself. It is a science fiction/political drama that offers one solution to the challenges we face in protecting our environment.
FOOTNOTE:
Bookman Beattie is hugely intrigued by this idea of an author tour via inernational blog sites. Is this a first? For their initiative lets have hats off to the author and his impressive publicist Paula Margulies of San Diego.
www.paulamargulies.com